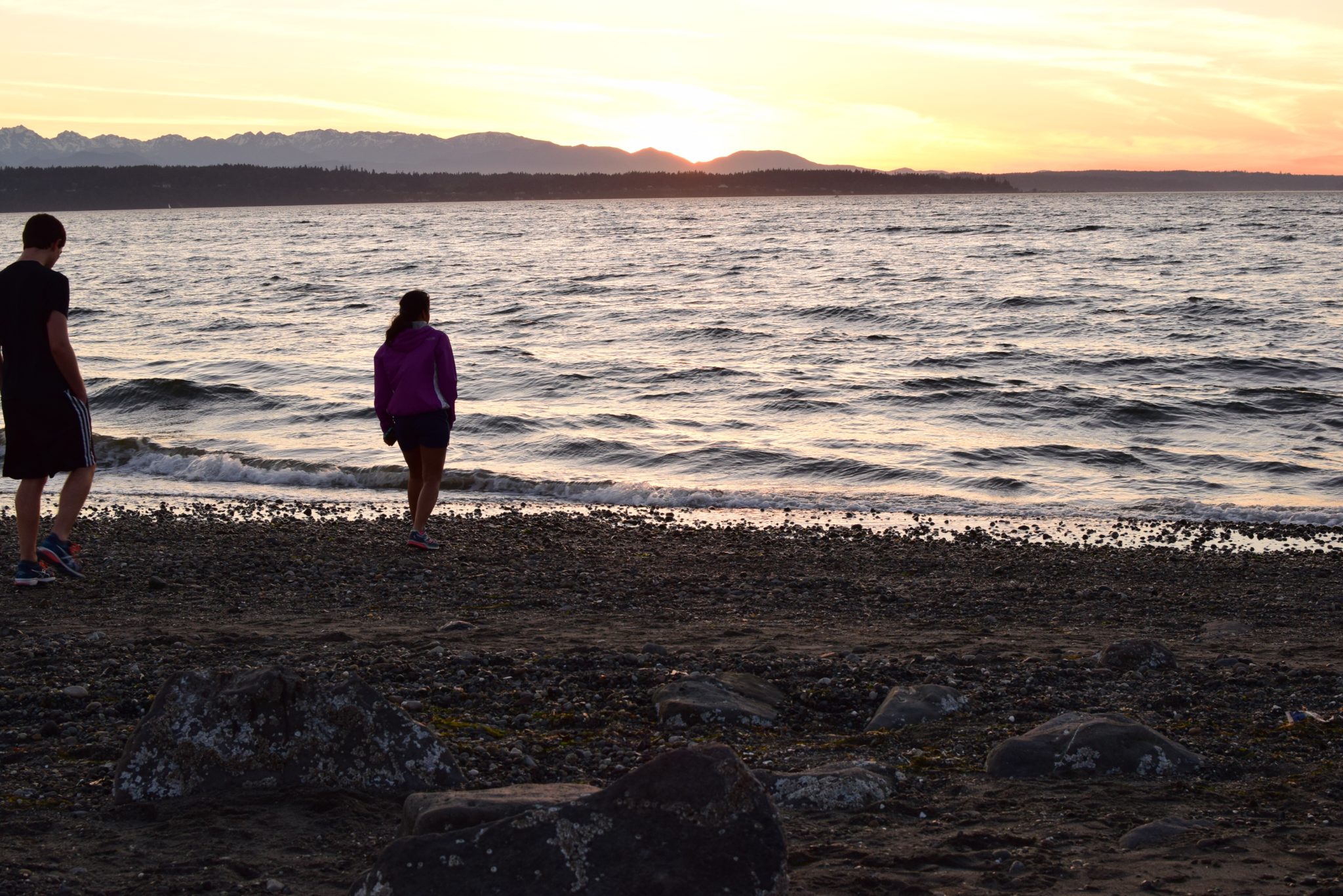 I recently received a question concerning shyness and the person was convinced that their lack of confidence had resulted in the destruction of all their relationships. As I’m sure there are more people than this person who are working through their own level of shyness and lack of confidence in making social connections, I thought to share my response in the hope that others will gain something from it.

One of the best pearls of wisdom I’ve received is from Russ Harris’s “The Confidence Gap.” In it he notes: “competence breeds confidence.” I mention this and explain it further in my response below and I highly recommend people reading the excellent book.

If you are not writing this while sitting in a cave in the middle of nowhere, having run power cords from a village miles away, I’m going to assume that you have some various forms of social connections, whether that be friends of some kind and/or work connections. Let’s back up from the universal statements that you’ve “tried everything” and how this shyness has “ruined my life and relationships.” I think you’ll notice that you do in fact have relationships, the issue is that they aren’t what you would like them to be.

Which is perfectly fine to be frustrated about! Here’s why it’s important to step away from the universal condemnations: you have the skills to move forward, you’re just not seeing them and that lack of sight is making it difficult to build off of them in new ways.

Begin by looking at what you already do: how do conversations usually go? Do you go out at all? How do you respond to questions/inquiries in life and at work? It doesn’t matter whether your responses to all these are the ideal of what you want them to be, the point is to see what you’re already doing.

Once you’ve taken note of what you’re doing, consider next what you’re avoiding by not expanding on those skills. What is it about social connections that has you so worried and anxious that you don’t pursue them? If the answer is some form of rejection, note immediately that you’ve already achieved this by avoiding that very thing! Seriously, avoidance is fulfilling all your fears while lying to you about being helpful. Avoidance is an emotional narcotic, setting up the pitfalls you’re afraid might happen and then pushing you in anyway.

So, what next? If you want your life to continue the way it is, then by all means don’t change your behavior. If you want something different, then you have to try something else and a quick way of doing so is building off of what you’re already doing. Even if what you’re doing is 2% of where you’d like to be, it’s amazing what doubling that effort every week or so will lead to. Confidence is a trap when we try to seek it first, it’s like fool’s gold, shiny and great, until we run smack into our doubts again and it crumbles. Focus on the doing, no matter how small, and build up from whatever level of competence you’re currently at. Eventually your confidence will rise as you do more of what you want and this time it will last.

As a last point, acknowledge to yourself that this is going to suck. Anxiety isn’t necessarily a sign that what you’re doing is wrong, it’s simply an assessment that what you’re doing is different and outside your perceived norm. You’re going to have this feeling as you grow. Say hi to it, hug it, thank it for letting you know you’re exploring life and then let it go on its way have served its purpose. If you have to be present and let it go often at first, that’s ok too, emotions have a way of becoming a habit and like all habits, they’re difficult to change.

There’s a sense of empowerment in describing a personal experience as unique, special or otherwise different than anybody else’s. In particular when it comes to difficulty, a unique status builds a space for dismissing the wisdom of others and provides the ground for accepting its potential insurmountable quality. How often have we heard someone, when confronted by clear objective advice, say: “yes, but my situation is different”?

Certainly each situation, difficult or easy, is different in the sense of being built out of the particular variables in your life. However, at the level of principle, at the level of usable and workable life-skills, the differences are far outweighed by the similarities of both being human and living in a generally homogenous society.

People are Unique, Relationship Skills are Not

Which brings us to how particular forms of relationship are somehow intrinsically different than other forms. As a starting place, let’s consider ‘relationship’ as any form of interaction between two or more people and/or objects. The qualities that change are the depth of the connection and the extent of the effects. Because of those changes we apply different labels and judgments as to their meaning and importance.

Let’s be clear: you have as much of a relationship, at this base level, with the chair you’re sitting on as you do with the person you’re having sex with. If you don’t believe me, imagine that chair suddenly disappearing and you having an immediate intimate connection between your backside and the hard floor beneath you. Yes there was a relationship involved and just because you took it for granted doesn’t mean it didn’t exist. In fact, that very lack of awareness is often at the heart of so many difficulties in any form of relationship.

With this understanding of ‘relationship’ in mind, we can look at two general labels or forms of relationship: monogamy and polyamory. Broadly speaking, the difference between the two is the latter allows for, if not is always engaged with, more than one sexual partner, usually with the intention of doing so within an agreed-upon level of commitment. That latter point of commitment distinguishes polyamory from, say, swinging. Honestly, there are numerous ways of looking at this and the point isn’t to get bogged down in minutiae.

Below, you’ll see a Venn diagram of “Relationship Problems” within monogamy and polyamory. This is not supposed to be indicative of how everyone views the differences, it’s just an example, albeit one with a list that seems to be offered up quite regularly. 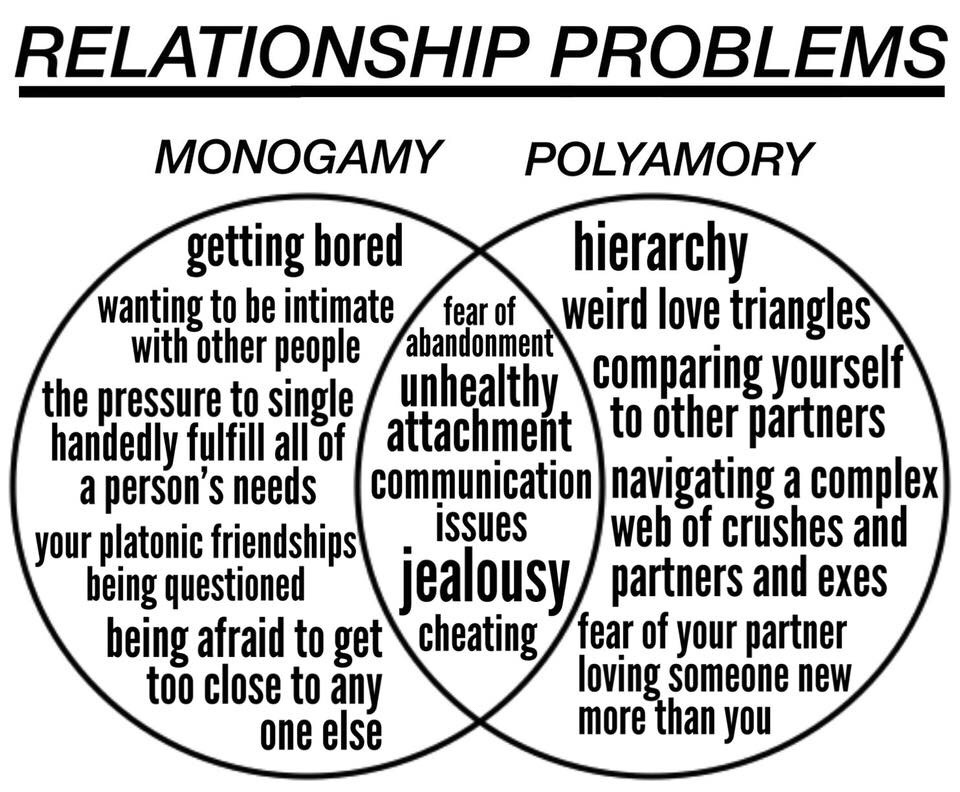 Let’s get the conclusion being offered here, contrary to the diagram, out of the way: there is simply no relationship problem that is different in kind between any form of relationship. The differences are always the particular variables involved, not some issue uniquely found within a particular relationship form. Further, the skills needed to address problems are generalizable across all the forms.

All of the problems here indicated are quite possible in any relationship between two or more consenting human beings. What the form of relationship will change is the quantity of the type of problem being dealt with and differences in the, hopefully discussed, agreements made between those involved.

Take for instance ‘hierarchy,’ a problem that supposedly only exists in polyamory. The complaints that “he’s married to his job” or “I’m a gamer widow” come to mind and those are just two. The inevitability of making choices concerning the priorities of interests is not solely the purview of a particular relationship form. The type of choices available will change, but that’s true of every relationship.

Unfortunately, there are any number of people in monogamous relationships who believe they’ll never have a problem with their partner loving someone else more or having to deal with being a priority.

On the other side, take “wanting to be intimate with other people.” To say this isn’t a problem within polyamory is to offer an idealized form rather than any practical reality. One of the stereotypes often encountered by people who label themselves polyamorous is the assumption they want to have sex with any and everyone. Not only is this not true, but typically the desire, when it does arise, is not immediately acted on without concern or discussion with the others involved. In that sense, the desire (a profoundly human emotional inevitability) is a problem, it’s just being handled differently and, hopefully, with a lot less melodrama.

Unfortunately, there are any number of people in polyamorous relationships who think they’ll never have to worry about being bored, or being concerned about whether they or one of their partners is getting too close to someone else.

What a Different Form Can Help With

The issue here is one of exclusivity, a belief that a form of relational connection cuts you off from potential struggles of being human. The problem with a hyper-focus on differences in relationship forms is two-fold:

One: there is much wisdom to be found from people engaging in different forms that can be of immense use in whatever form you’re currently involved in and…

Two: believing the form of relationship you’re in excludes you from having particular problems will result in being blindsided when they do happen.

What a look at different forms can give us is an appreciation for the vast potential in human connectivity. It is truly beautiful and wisdom is found in seeing how different forms deal with problems that arise. There are undoubtedly numerous behaviors that can be used in your form of relationship without compromising the agreements you have with your partner(s). Taking a look can be part of any journey you’re on with whoever is with you.

Breaking Away from Enabling

The Codependent in All of Us